The Interactive Film Theater is the world's first interactive film experience based on movement sensors. Jump, scream and dance to help the girl Anna fight the mysterious dark mist that spreads all over town.

Forget about sinking into a soft chair with candy and popcorn! This film theater is not about passive entertainment. In fact, it has no chairs at all!

A strange, dark mist is spreading across town leaving everybody as passive and motionless as zombies.

Your task is to help the girl Anna save her family and everybody else by discovering the mysterious “magical spark”. You must jump, skip, scream, dance and get moving! It is all up to you!

The Interactive Film Theater is the world’s first interactive film experience based on movement sensors. It is developed by Experimentarium in collaboration with the Canadian science center Science North.

The animation film “The girl, who would not sit still” is produced in collaboration with Danish Ghost VFX, who has also made visual effects for Hollywood Blockbusters like Jurassic World. The screenplay is by the American screenwriter Philip LaZebnik, known from animated Disney classics Pocahontas and Mulan. 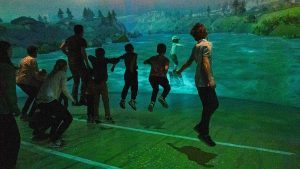 This exhibition is funded by